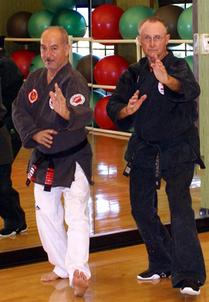 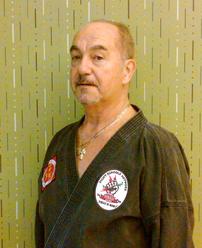 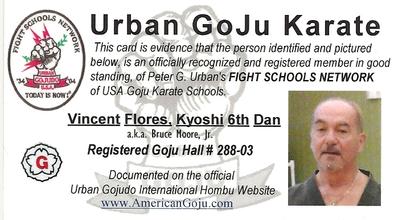 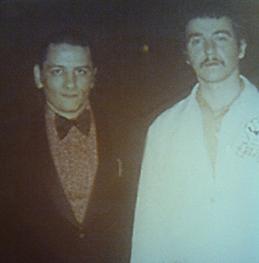 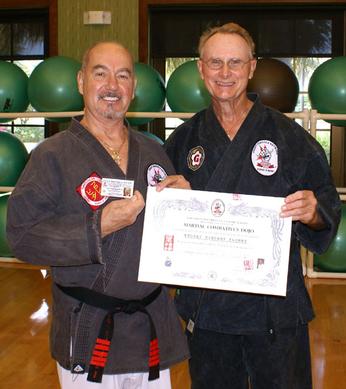 AN INTERVIEW  WITH  KYOSHI  FLORES

Webmaster:  Who was your first karate teacher, where was this, and how old were you when you began training?
Flores:  My first teacher was Aaron Banks, at a studio on 52nd. St. NYC. This was his first dojo, I was about 21 years old. I trained with Sensei Banks for about 3 years. I was promoted to Shodan (1st Degree).

Webmaster:   How old were you when you first started training with Urban?
Flores:  In 1968 I was 24 years young

Webmaster:  Where was his dojo when did you first start training with him?
Flores:  I trained with Sensei Urban in the "China Town Dojo" at 232 Canal Street in NYC.

Webmaster:   Did you have to travel far to train, or was the dojo in your neighborhood?
Flores:  I used to live in Spanish Harlem on 105th St. In Manhattan, I would drive in traffic for about 1-1/2 hours one way, and if it was on a Friday, forget it, it with take me more than 2-1/2 hours one way.

Webmaster:   How long (years), did you train with Sensei Urban?
Flores:  Off and On, about five or six years. The reason I say Off and ON is because he did not always have classes. Sometimes we will talk for hours about everything and anything. Sensei Urban was a real good talker. I was already teaching at a neighborhood community center, and I used to bring my students to meet Maestro Urban.

Webmaster:   Where was the location of your own dojo, when Sensei allowed you to teach?
Flores:  My first “true” dojo, was on West 105th Street and Broadway, on the second floor loft. I went to China Town Dojo and picked up Sensei Urban for him to SANCTION my dojo. That day I was promoted to 3rd Dan (Sandan). He was very pleased with the entire set up. He really didn't say very much, but his face said it all.

Webmaster:  Your name is now Bruce Moore, Jr. - When and why was it changed from Vincent Flores?
Flores:  Around 1975 I found myself having a real hard time getting a job. I found, or though, that there was a lot of discrimination on Hispanics, and of course, Blacks. For more than two years I washed dishes, cleaned bathrooms and did anything to support my wife and child. Then one day someone said to me: “It’s your name!  that's why you’re getting these nothing jobs!”.
So this is what I did: I loved Bruce Lee, and my first name became Bruce.
Then I saw a sign for “Benjamin Moore Paints” and that's where Moore came from. I just added the “Jr.” to make it sound real.  Bruce Moore, Jr. was born and Vincent Flores disappeared. Shortly thereafter. I got a job as a social worker making more money than I have ever made in my entire life!
Was it true about "Discrimination"? I don't know, but it changed my life, that's for sure!  I became a new person looking at things a little differently.
My family accepted my name change, and life went on. I got married as Bruce Moore, had three great daughters, and adopted three boys who became the new family of Bruce Moore, Jr., and that's it!...That's my story, and is true.

Webmaster:  After all these years, why are you now getting involved again with Maestro Urban’s U.S.A. Goju karate organization?
Flores:   In my days through all my Karate Tournaments and the hundreds of students that I have made into great fighters. Martial Arts is in my blood, no matter what name I use!
I feel that something is missing in my life. I never knew that a USA GOJU Organization even existed. I know that I still have something to offer. and I will continue training. I know that I have missed a lot of years but “TODAY IS NOW!”
I am so please that I was accepted in the organization and I will do my very best to help bring it to the next level. Great respect, and a big “Thank You” to my sponsor, webmaster Hanshi James Price.Webmaster:  Do you have more photos of you and Sensei that can be posted on the website?
Flores:  I am sorry that I don't personally have any more, but I am sure that there are a lot more out there somewhere. Maybe all we have to do is ask?
Sensei Wm. Louie used to come to all of my tournaments,  and probably has tons of photos, with a lot of other Sensei too. 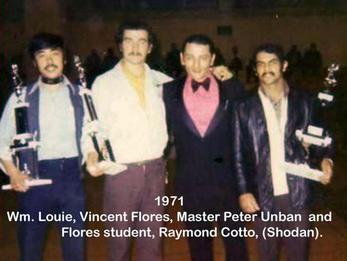