Anyone with the money-power to do so may put and or say anything they want to on the internet with no consequences. For example, Gianni Rossato of Goju Italia outright plagiarized my "Karate Dojo" with no regard to copyright infringements from the Tuttle Company just look at the Internet and you will see for yourself! In Italy, one can do anything like that and fool most of the world’s people most of the time for as long as they don’t care about looking foolish.

Urban is American Goju and USA Goju is Urban and is Goju USAGA aka Urban Systems of America Goju Association.

Hear me world, when it comes to the internet, go to the horse’s mouth and not the horse’s posterior if you want accuracy and not manipulative interpretation from practiced masters of dubious deniability.

In the beginning, there was the unknown. In the face of the unknowable every one of us is equally equal for the same reason that:
"That which is offered without proof may be disputed without proof".

A professional critic is anyone with no talent. A copycat is anyone with no ethics.
A usurpation artist is anyone with no morals and a terminally-inaccurate superiority complex.
An imposter in anything has an Identity Crisis for which there is no peace of mind.
A liar is destined to come back in the next life as a "Makiwara" in a Dojo of lunatics.
A leader is anyone who does anything first.

I, Urban, declare that the purpose and end result of total mastery is for the evaporation of all mystery. Mysticism makes money. Urban is most castigated by everyone who never wants "the white belts" to see or hear or read about such thinking for progress for the greatest good for the greatest number in any human society.

Urban believes that: The Sensei’s word is law by consent of the governed. Everyone leaves the "by consent" of the governed part off because it would require that a Sensei lead by example and not imaginary power of some divine mandate.

There arc no Superman Messiahs in anything. That’s what the phrase "In The Dance" means when describing the diseases known. as "Black Belt Fever" or ‘"Pompous-Ass" behavior syndromes on any and all levels of martial societies.

An individual dojo or an Individual family is not a participatory democracy, but a world of families is: because nothing else can promote human progress!

Now: Everything concerning USA Goju Karatedo according to" Urban" is condensed by Urban to read as follows:

PAGE 2
In 1959 Urban propagated and popularized the Karatedo of Yamaguchi’s Gojukai and Mas Oyama's Kyokushinkai and Richard Kim’s Butokukai in New York City{Concomitantly} and with devout filial piety to that trinity with equal dedication.

In the process, Urban begat "Everybody who is Anybody" in: "All-American Goju Systems" with no regard to benefit or prosperity for himself. He put the Art before his own heart and brains. All {message repeats} All the Dans and Senseis of today have {all} message repeats{all} of their "Pedigrees" from Urban. This is fact; not fantasy! All Urban's students know that, but don’t ever want their students to realize that.

Finally, Urban realized in 1967 that "Johnny Apple Seedism" and intrinsic" Yankee Altruism" would, could, did and always will and still does end up in recognition of historically accurate "social-credits" and prosperity only long after death and can never be any other way. Why? Such is because, human nature is such that the "Crab-Barrel" theory of human behavior is, was and always will be such that any "sincere benefactor" of a society of his, her or its own kind will always have the hand that feeds them bitten and the hands that free them from the destiny of their own mediocrity will be never rewarded!

God gave each and every one of my rich and famous students their parents, their parents gave them life. I, their Sensei, gave them a profession, all the education and credibility they needed to fulfill their human potential.

When I am gone, as is, and was, and always will be the case of all founders of successful "Artful Martial Sciences" from before the time of accurately recorded history to and beyond the time when all of our bones have turned to dust. No one can ever take our place! Each and everyone of us must of necessity make a place for ourselves!

There is no "Royal Road" to anything for anyone! Greatness in anything does not rub off no matter what our names are. Why?

Well by golly, because: It can’t even if it wanted to! Mozart had two sons. Neither of them cared at all about music as a profession.
A calling is given by God and not commissioned by men. Amen.

I, the teacher, give these internet pages to my very long time, loyal and sincere student: Dayton Guinee founder of "American Heritage Goju", whose sacred obligation to me and all my students of past times and the here and now and In time to come is: to not alter, change or interpret a single word of my message.

Dayton Guinee’s Internet Dojo address and/or Fax contact information will be cited by him and maintained by him alone.
{All access information to follow in the near future}

End of my report from My Fanshua Religious Monastery Headquarters here in New Jersey. 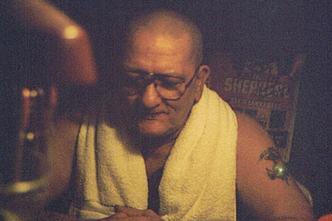 Return to the to of the page

USA Goju According to URBAN