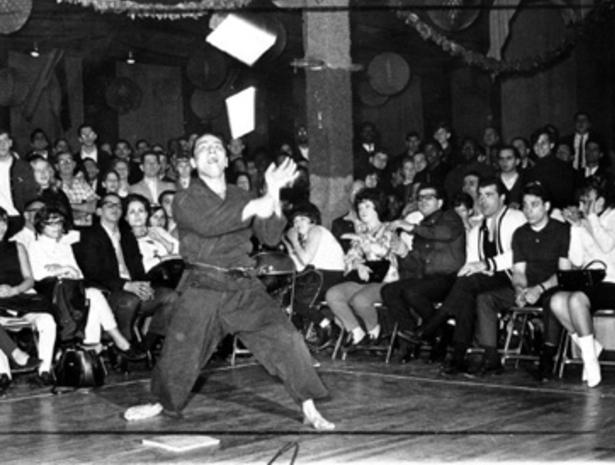 I met Sensei when I was a green Belt, and after over 34 years in GoJu, My Sensei and I ran the YIng Yee Urban Karate tournaments for 10 years. At one time we had three tournaments per year and some of the best fighters and forms competitors came there to compete. It was a who's who in the Martial Arts world. About two years ago I held a seminar which Sensei was the teacher.  He taught us for over four hours, non stop. Believe me, when it was over he felt great, and was very happy to get back into the swing of things.

He was a Sensei who never new when to stop or take a break. His Sensei's were Richard Kim, whom he called his Zen Grandmaster, Grandmaster Masutatsu Oyama, and the one to change his whole life towards GOJU,  Grandmaster Gogen Yamaguchi.  WOW! He talked admiringly to me about them. He was proud to be their student.  O'Sensei has also became like them. I believe that he is a Meijin and is now with his Meijin teachers. He was a divine genius. He was a model of what a career sensei should be like. He was not a saint, He was a human being like all of us, he was a restless martial artist, always trying to perfect his system, He had deep moods, that came and went. He loved to play the piano. He was dedicated to his newsletter. He loved KARATE more than life itself, to him karate was life, air, food, everything.

For the fortunate among us (and there are hundreds, because Master Urban's students by themselves can fill a book on who's is who in karate), we should all be tempted to duplicate his achievements and more so, his ambition to spread the art of Urban's GOJU, USA GOJU, American GOJU (what ever you call it, they are all him). Ultimately, all of us will be judged by our efforts, our contribution and our success in this effort in the dojo, where leaders are born and made. Our Sensei's achievement is huge, all of you are aware of it, this GOJU is one of the biggest in the world, he is one of the most admired Hanshi that ever lived.

Please remember that his daughter Julia, needs your support and all of our help to do what is right for our Sensei (Julia's father, and her daughter Rachel's, grandfather), the father of all American GOJU SYSTEMS. This is a time to show our loyalty and support as we  are in a mourning period. We are not a weak nation. "Sensei would always tell you the truth when you needed to hear it." You may not of liked it but you heard it.

We are here today because in someway, Maestro was your SENSEI, or you are fortunate to be a student of one of HIS STUDENTS. Each one of us has our own personal perspective of this GREAT SENSEI, our own personal memories of him. But there is no doubt that all of us have been touched by his remarkable life. 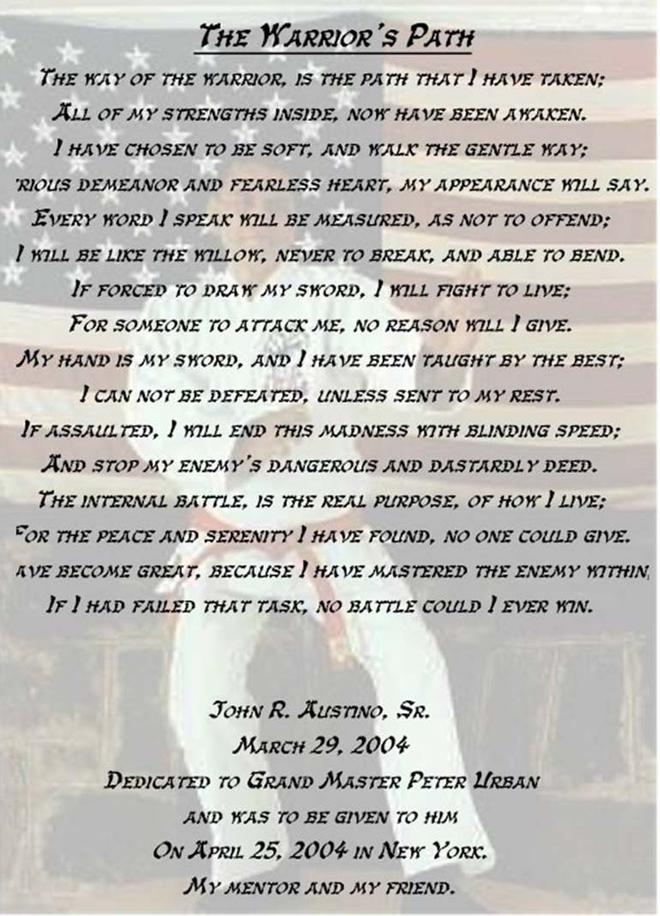 The first time I met Sensei Urban was on March 13, 1966 at my dad's tournament here on Staten Island. This photo taken on that Sunday, shows GM Urban "skeet shooting" boards. Quite an impression!!

Page 2 of Eulogy to Sensei Urban 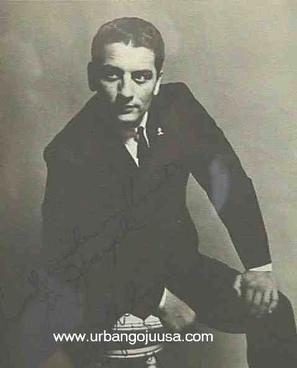 It was a rainy Sunday, August 12, 1979.  Grand Master Urban (“Sensei”) was teaching a seminar at Sheehan Pascetta's (“Sheehan”) dojo in Blackwood, NJ.  I was a student there who thought of the dojo as her second home.  I wanted to attend the seminar in the worse way, but was too young.  Instead, Sheehan allowed me to come to the dojo after the seminar.  When I walked in the dojo lobby and looked onto the training floor, there he was, Sensei Urban.  After hearing all of the stories from Sheehan and what it was like to train with Sensei, for me, it was like Christmas all over again.  When Sheehan introduced me to Sensei, the words he used were “Amy this is my Sensei and the Grand Master of the style we practice and learn, Peter Urban”.  It was like meeting your grandfather for the first time.  The man who “taught your dojo father” so to speak all of the things you are and will be learning throughout your martial arts career.

Sensei spoke softly to me as a “grandfather” would to a child with a simple “hello”.  My heart felt like a Christmas tree lit for the first time; big, bright and beautiful.  Sheehan then explained to Sensei that it was my tenth birthday and he thought it would be a nice birthday gift for me to meet the man who began it all.  Sensei then took an advertisement flyer of his seminar and turned it over.  Sensei wrote me a birthday greeting that read “Happy Birthday Leo Amy, Keeping Punching Always, Grand Master Peter Urban 10th Dan.”  My father then took a photo of the three of us together, which I keep on my desk at work.  “We had a small conversation too.  Well, as much as a 10 year old can have with a Grand Master.  To this day, the autograph hangs in my home in a frame with the rest of my awards and accomplishments, etc.

There was a photo of the three of us taken that day by my father.  I keep on my desk at work for it was a very special day for me.  I met the “GoJu Grandfather” who taught my “Dojo Father” who shared and taught his “Dojo daughter” a way of life.  These lessons are shared and used in my personal as well as business lifestyles.

To this day, I get a lump in my throat thinking of that moment.  It was innocent, honorable and a child’s wish/dream was fulfilled.  For a man of Grand Master Peter Urban’s statue to take the time out for a 10 year-old little girl is precious.  This moment is very special to me for it was like a “family” reuniting of three different generations; the Master, Teacher and Student.

“When I began instruction at Maestro Urban’s dojo (at eight years old), I felt intimidated, as if I was a lost rabbit in a large forest. There I was, surrounded by students all much older than I. All of them knew what they were doing, and were working amongst themselves or independently. Suddenly, a loud bell would ring, next thing you heard was the voice of Master Urban “Now here this, Now here this, Prepare for training”. Everyone would quickly position themselves accordingly on the floor by rank and snap to attention.

In the dojo, Wow! My sempai were a “Who’s Who List” of some of the greatest martial artists. To name a few: Leon Wallace, Al Gotay, Riley Hawkins, Louis Delgado, and Kow Loon (Kayo) Ong (who is still my sempai to this day and who I go to when I have questions about the Ko Ryu). Some were very competitive, others were harsh, but like family, they took pride in helping me learn and kept pushing me forward.

From day one, the fundamental principles that make up USA Goju were stressed. The classes consisted of a warm-up, kihon, kata and kumite plus! I practiced the kata day in and day out. The kihons were made to become second nature and sparring was done from the very first day I entered the dojo. Bunkai to every kata was taught with the only limits being those you imposed on yourself. Master Urban stressed the use of your brain not just your body.

Maestro Urban was certainly militaristic and regimented in his style of training. The difference was that he injected into his students, a sense of belonging to something very special, USA Goju. He was certainly “colorful” in his ways, with boundless energy and spirit. Above all, he is [was] an intellectual.”​

With honor and love of our Maestro, We share our stories...So that we who were fortunate to know him in "The Then and There",  can share fond memories for those who read this in "The Here and Now".