The Elephant Dojo was founded in the year 1972. At the beginning there were four classes per day three times a week: on Monday, on Wednesday and on Friday. The first class was Ju Jutsu for kinder. The experience was really nice because the kinder showed interest and enthusiasm. Some of them are still with me. The second class was Karate for about thirty children. The usual topics were kihon, kata and kumite. Some of them are still with me. The third class was self defence for women. Some of them were pretty aggressive and this was a cause for some problems and conflicts. The fourth class was still JuJutsu for about twenty-five adults. The class was really special because there was a real friendship between them. Some of these guys are still under my guide.

As far I am concerned, I took classes two times a week on Tuesday and on Saturday.

In the year 1974 Maestro came to Italy for the first time and he took the occasion to visit my Dojo. The Dojo was big, about 900 sq. meters. During Maestro’s visit, people were training in order to prepare an international competition that would have taken place one week after in Milan. Maestro Urban spent time walking and watching the training while handling his curved staff (like a pastoral staff).

At the end of the training I was introduced to Maestro Urban, and he told me:

“Elephant, this is the name of this Dojo, Elephant’s Dojo”. Elephant was the name that he assigned me.

Maestro came to Italy others time. In the year 1977 he stayed in Italy for about six months. We often spent time together talking in Spanish. After training we discussed about Karate, philosophy and played chess.

Since I was a child I was really interested in the stories of “American Indians”. This was a topic that Maestro and I discussed a lot having very similar thoughts.

Maestro Urban also talked with pleasure, with my wife. She was nicknamed the “Shark”. Once he told me that it would have been interesting to watch a fight between a shark and an elephant!

During these six months, Maestro gave a lot of classes. After each class I used to take some notes in a small book about the lessons that Maestro gave us. He was so happy and would agree with this, my habit. On these books I wrote all of the programs the Maestro showed: karate, kata, jujutsu kata, and kihon (they are 108!). Maestro Urban was used to saying that the 108 kihon are the technical core of the Urban Goju.

A day before his departure, Maestro wanted to have a look at my books [notes]. He examined them very carefully and asked me [for]some explanations. After that, Maestro Urban assigned me the Urban Goju Hall number: GH#002.

I visited Maestro Urban several times in the USA and many others book were filled. 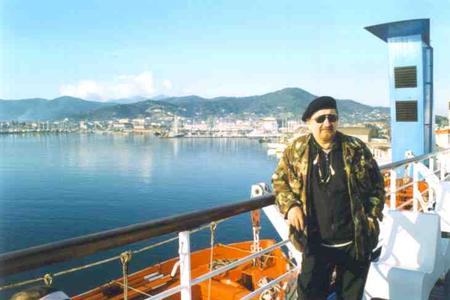 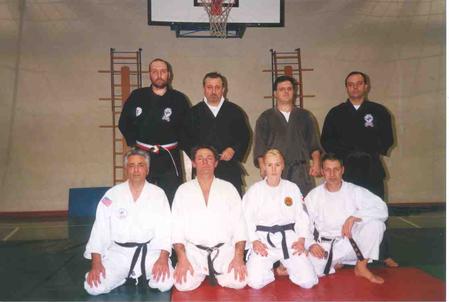 "The years teach/show things that days do not know"

Maestro Urban commenting on Giacometti, Hanshi:
Very rare collector's item: Circa yr. 2000 photograph of: M.0 GIANFRANCO GIACOMETTI, THE "ELEPHANT OF PADOVA, ITALY", GOJU HALL #002. He is my younger brother, and the most versatile Sensei in my Goju Halls Fight Schools Network. Oh, by the way, he has absolutely no equal in classical "Ju-Jitsu", even though he is a "Lifer Gojudo Karateka Sensei" second to none in my philosophy, psychology, and chess master par excellence. He will be the distinguished guest of honor at Shihan Gotay's 14th Annual Great World Class Tournament event at the John Jay College Gym in Mid-Manhattan on the very last Sunday of the month of April in the year 2003. "Urban"